OSSA Names 2020 Administrator of the Year 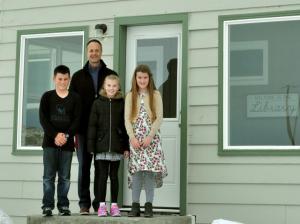 Crane, OR – The Oregon Small Schools Association (OSSA) is proud to announce that Matt Hawley has been named its 2020 Administrator of the Year. Hawley is the superintendent of Crane Elementary School District and Crane Union High School, located in Crane, Oregon, in Harney County. Crane Union High School is a boarding school that serves students from a large geographic area. Hawley also serves as the public school sponsor for Silvies River Charter School and Oregon Family School.

When Hawley took over the helm at Crane several years ago, the district was struggling financially and academically. According to Shannon Criss, superintendent of the Harney Education Service District, “Under Mr. Hawley’s leadership the districts are financially secure, the facilities have seen tremendous improvements and student achievement and opportunities are on the rise.” Criss said she was amazed at the number of projects Hawley had going to improve the grounds and classrooms, as well as housing for teachers.

Criss said that Hawley is committed not only to students’ academic success, but to the “whole child.” “He understands that a student who is well-rounded is one who can excel both in and out of the classroom,” Criss said.

Athletics have excelled at Crane, as well as offerings for students. Hawley worked closely with Silvies River Charter School to bring the Paxton Patterson Career classes to the charter school and to Crane Union High School, a big positive for their rural and charter school students.

“Matt Hawley is a superintendent who possesses qualities that make him stand out from the rest. I have only known Matt a short time, but in that time have come to respect and admire his dedication and commitment to the betterment of education for all,” Criss said.

Hawley received his OSSA 2020 Administrator of the Year award at the Oregon School Law Conference in December.

“The OSSA Board of Directors is very happy to honor Matt Hawley this year. He is an exemplary leader whose work has improved the success of students in Oregon’s small school districts,” said Michael Carter, OSSA board president.

Hawley earned his Bachelor of Education degree from Western Oregon State College and his Masters in Education Leadership from Northwest Nazarene University. He received his Superintendent Endorsement/Education Specialist Degree from University of Idaho and completed his Continuing Administration Licensure Program from Lewis & Clark College. Hawley began his teaching career at Hood River Valley High School, worked in the Vale School District and came to Harney County schools in 2015.

OSSA recognizes one school administrator each year who excels in his/her leadership position. Criteria include integrity, leadership, commitment to community, scholarship and student achievement. OSSA serves as an advocate for the benefits of rural education and small schools across the state. For more information, visit www.oregonssa.org.